Mercedes-Benz E-Class From Past To Present

The Mercedes-Benz E-Class is a range of executive cars manufactured by German automaker Mercedes-Benz in various engine and body configurations. Produced since 1953, the E-Class falls midrange in the Mercedes line-up, and has been marketed worldwide across five generations.

Before 1993, the E in Mercedes-Benz nomenclature was a suffix following a vehicle's model number which stood for Einspritzmotor (German for fuel injection engine). It began to appear in the early 1960s, when that feature began to be utilized broadly in the maker's product line, and not just in its upper tier luxury and sporting models. By the launch of the facelifted W124 in 1993 fuel-injection was ubiquitous in Mercedes engines, and the E was adopted as a prefix (i.e., E 220) and the model line referred to officially as the E-Class (or E-Klasse). All generations of the E-Class have offered either rear-wheel drive or Mercedes' 4Matic four-wheel drive system.

Historically, the E-Class is Mercedes-Benz' best-selling model, with more than 13 million sold by 2015. The first E-Class series was originally available as four-door sedan, five-door station wagon, 2 door coupe and 2 door convertible. From 1997 to 2009, the equivalent coupe and convertible were sold under the Mercedes-Benz CLK-Class nameplate; which was actually based on the mechanical underpinnings of the smaller C-Class while borrowing the styling and some powertrains from the E-Class, a trend continued with the C207 E-Class coupe/convertible which was sold parallel to the W212 E-Class sedan/wagon. With the latest incarnation of the E-Class released for the 2017 model year, all body styles share the same W213 platform.

Due to the E-Class's size and durability, it has filled many market segments, from personal cars to frequently serving as taxis in European countries, as well special-purpose vehicles (e.g., police or ambulance modifications) from the factory. 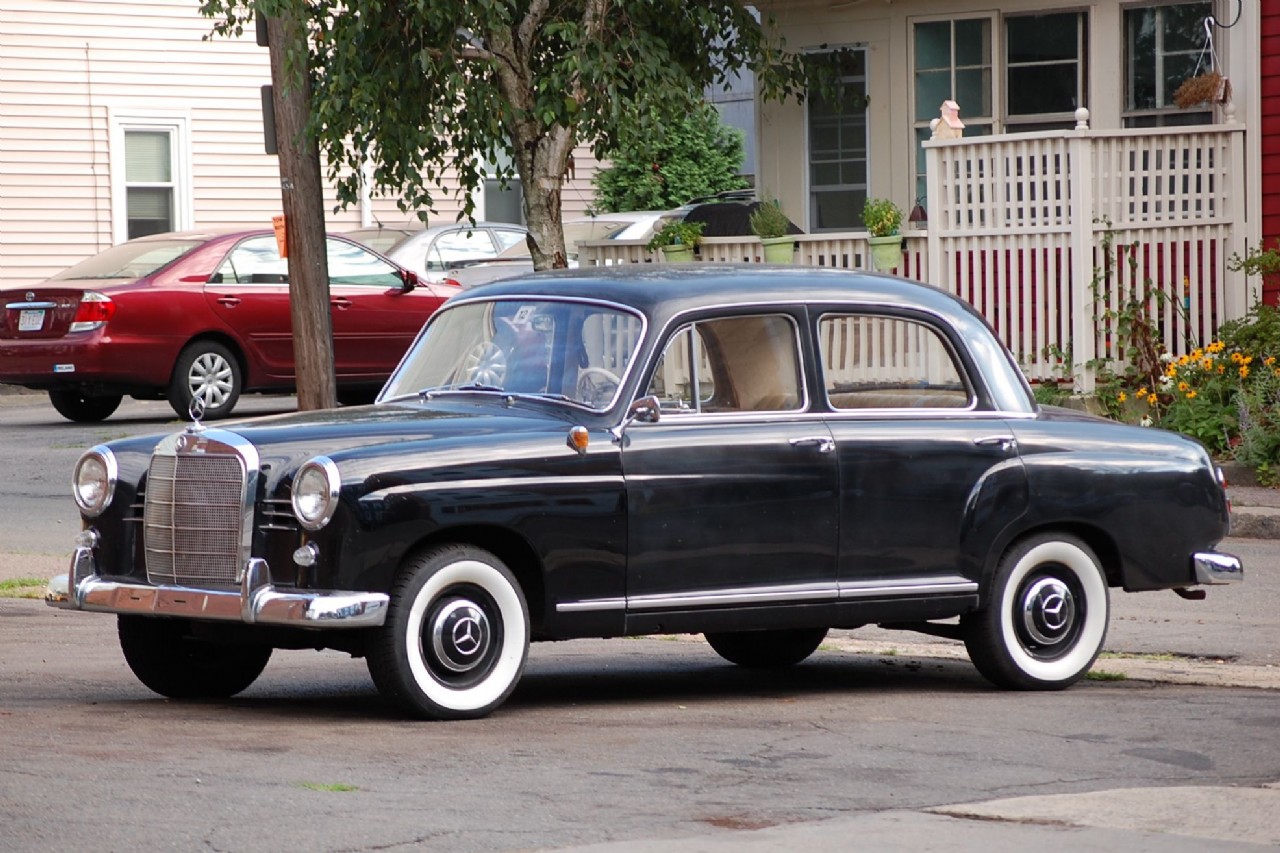 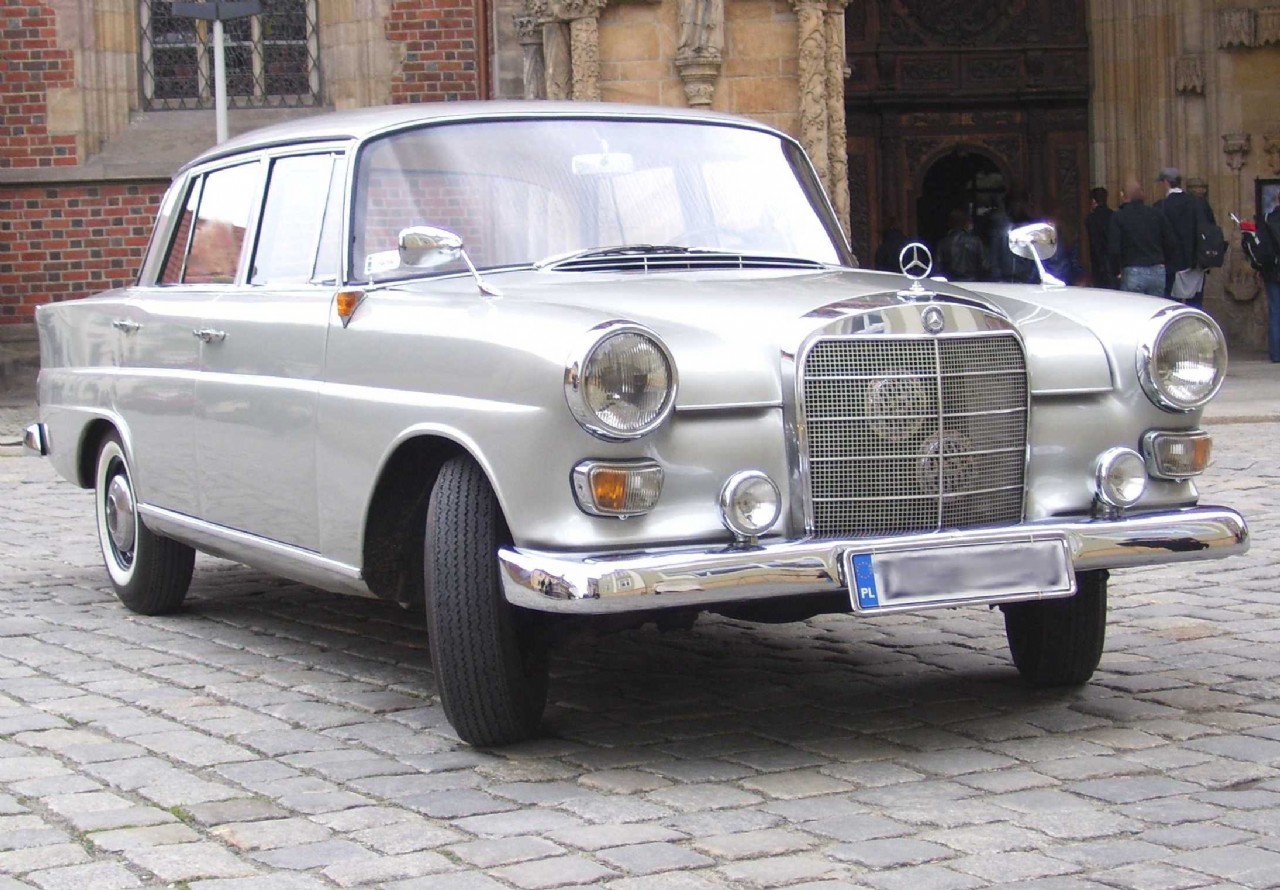 Mercedes added tailfins to both the big S-Class and the new W110 'Fintail' 190 of 1962. In the 1965 230 model a Straight-6 engine appeared for the first time, and the four cylinder engine grew in displacement. 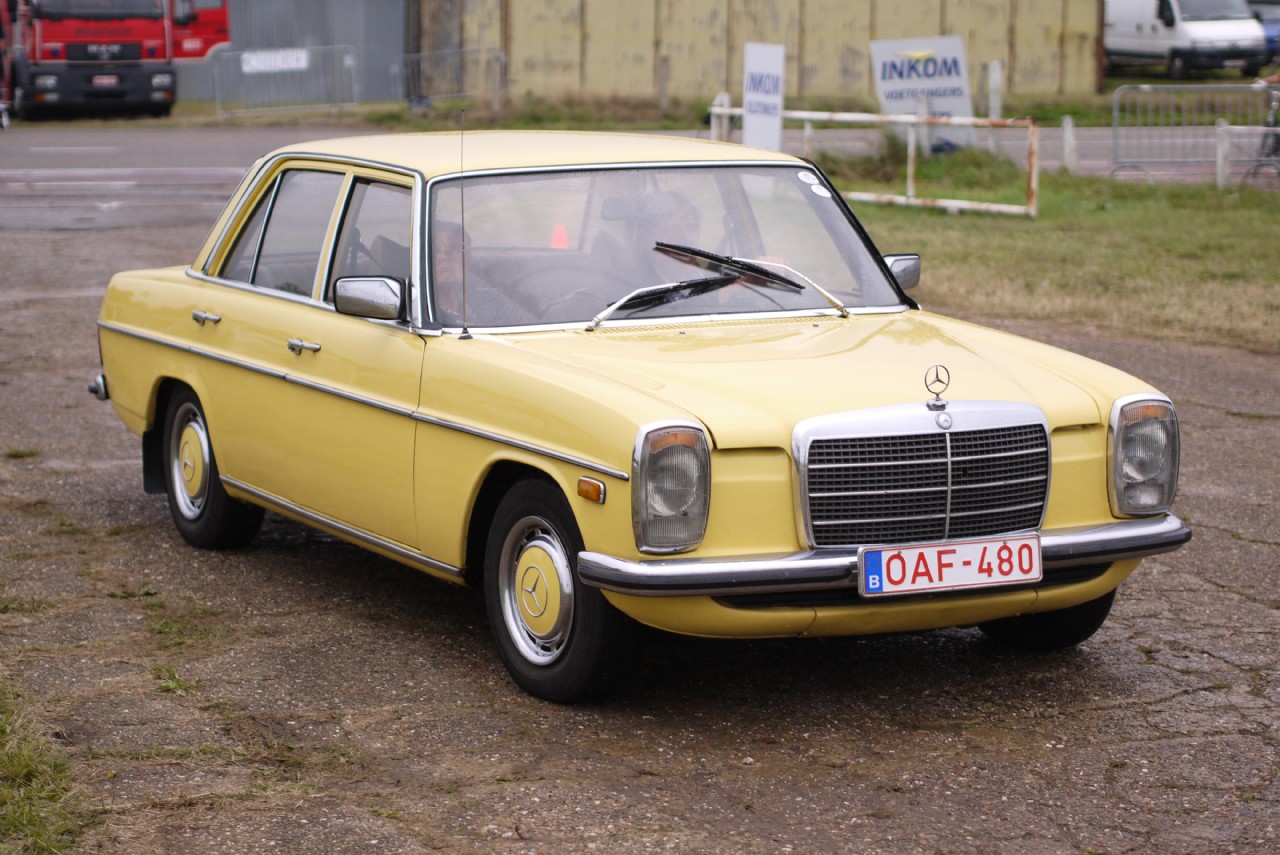 The popular W123 quickly became a best-seller on its launch in 1976. Especially in diesel powered 200D and 240D (also the five-cylinder 300D) guises, the cars enhanced the company's reputation for product quality. Over 2.6 million were produced until the end of production in 1986. Saloon/Sedan, Coupé and Estate body configurations were offered.

The W124 was presented in 1984 and introduced several new standards for a mid-size Mercedes. It was the third car to inherit the company's new design theme since the late 1970s, following the flagship W126 and compact W201.

Similar to its predecessors, the W124 also offered a coupé and estate body styles. A new convertible (internally A124) was also available, making it the first mid-size Mercedes convertible.

The "E-Class" name first appeared with the facelifted W124 in 1993 for the model year 1994 (the W124 was introduced in 1984 but continued with the older naming convention until 1993, when all Mercedes-Benz models switched to a new system, e.g. E 320 instead of 300 E). The diesel versions continued to be the fuel economy option over the four and six-cylinder gasoline engines, and the gasoline V8 engines (available after 1992) increased gasoline power outputs further. Four-cylinder gasoline models were not marketed in the United States. The V8 powered sedans/saloons were named 400 E/500 E from 1992–1993, and E 420/E 500 after 1993. Likewise, the 3.0-litre cars (e.g. 300 E) were also re-badged to E 320 with the new 3.2-litre M104 engines and naming rationalization of 1994. For the diesel models the name change was less elegant, with the 250 D becoming the E 250 Diesel for example.

The W210 E-Class, launched in 1995, brought the line firmly into the upper end of the mid-size luxury market.

Starting in 1996, the E-class made major changes compared to the earlier version of the E-class, including four large oval headlights, that gave Mercedes an updated image intended to attract more younger buyers and women. The new E-class was 1.6 inches longer and 2.3 inches wider and offered significantly more interior room but was still considered mid-size.

In September 1999 the W210 E-class was facelifted. This included visual, mechanical and quality improvements over the earlier versions.

The Mercedes-Benz E-Class was Motor Trend's Import Car of the Year for 1996.

Launched in 2002, the W211 E-Class was another evolution of the previous model.

The W211-based C219 CLS-Class sedan was introduced as a niche model in 2005, primarily to attract a younger demographic.

The W211 E-Class was facelifted in June 2006 for the 2007 model year to address quality and technical issues raised by earlier models, Sensotronic was dropped, while Pre-Safe (w/o brake support) was made standard. The largest factory built engine in the E-class range is the E500 (badged E550 in the U.S.) which had its engine size increased from 5 litres to 5.5 litres in 2006 along with the facelift. There is also an AMG model badged E63 AMG and other tuning house installations.

The W212 replaced the W211 in 2009 (as a 2010 model). Official photos of the W212 were leaked on the internet on 9 December 2008 ahead of its 2009 Geneva Motor Show unveiling. Scans of a leaked brochure were posted onto the internet in January 2009, detailing the whole E-Class range including the new E 200 CGI and E 230 CGI with direct injected forced inducted engines. New features included a blind spot monitor, Lane Keeping Assist, Pre-safe with Attention Assist and Night View Assist Plus. In the United States the E-Class was priced nearly US$4,600 less than the previous model. The W212 estate was also announced and available from November 2009.

In 2013, the E-Class was comprehensively facelifted, featuring significant styling changes, fuel economy improvements and updated safety features. Daimler invested close to €1 billion into the development of the extensive refresh, making it likely the most expensive mid-life facelift in the history of the automobile. The biggest change was the singular front lights replacing the twin headlamp design (marking the end of Mercedes's dual headlamps use) with integrated LED DRLs. Although not an all-new model, the W212 facelift was the only mid-cycle refresh featured on a family portrait of several generations of the E-Class side by side by Mercedes-Benz for the unveiling of the W213 E-Class. While the factory has rated the E63S model at 577hp/590 tq, there is significant real-world dynamometer testing that indicates the AMG-tuned S model exceeds 600hp at the flywheel.

The coupé (C207) was first shown at the 2009 Geneva Motor Show, while the convertible (A207) was unveiled at the 2010 North American International Auto Show. Both models replaced the previous C209/A209 CLK-Class models. The C207/A207 E-Class is based on the W204 C-Class platform, and are produced alongside each other in the Bremen plant.

Engine options for the W213 E-Class will see a major update, thanks to the switch to inline-6 engines from the current V6 engines, along with a new generation of four-cylinder diesel engines, codenamed OM654, and existing four-cylinder petrol engines.

The W213 E-Class is the second most technologically advanced Mercedes after the new S Class. The E-Class received the latest in autonomous driving technology for use at highway speeds, capable of piloting itself up to speeds of 130mph (210km/h) for up to 2 minutes. The system uses a complex array of motion sensors, radars and cameras to scan the road ahead, and requires the driver's hands to be placed on the wheel at all times. This feature was also available on the 4th generation Mercedes-AMG E 63 model.

In 2020, Mercedes-Benz introduced a facelift to the W213. Body styles will remain the same. The base model comes with the sporty Avantgarde Line exterior. One of the most notable changes in the interior is the new steering wheel. It now has no buttons, using only touch-pads for input. Another mode of input for the revolutionary MBUX system is a touch-pad in the centre console. MBUX, like other Mercedes-Benz vehicles is included for the first time in the E-Class. The base model will have a 4-cylinder paired to Mercedes-Benz's 9G-TRONIC transmission. ENERGIZING comfort and ENERGIZING coach, will be available on the E-Class. Mercedes-Benz says-"ENERGIZING comfort control networks various comfort systems in the vehicle, and uses musical and lighting moods plus a number of massage modes for a wide range of feel-good programmes. The “PowerNap” programme is available in the plug-in hybrids, which is useful when taking a break from driving at a rest area or when charging the battery en route, for example. The programme has three phases – falling asleep, sleeping, waking – and can enhance the performance of the driver and provide new energy. The ENERGIZING COACH is based on an intelligent algorithm, and recommends one of the programmes suited to the individual and situation. If a Garmin® wearable is integrated, personal values such as stress level or quality of sleep optimise the accuracy of the recommendation. The aim is for passengers to feel well and relaxed even during demanding or monotonous journeys."

The E-Class has the edge on practicality, thanks both to its (more) approachable price and its available wagon body. But for the essential Mercedes experience, the S-Class still rules the roost. In the end, Mercedes-Benz sedans are about the luxury, and in that department the S-Class can't be beat.

The Mercedes-Benz E-Class is a great luxury midsize car. It's easy to find a model that will suit your needs since it comes in sedan, coupe, convertible, and wagon body styles. The E-Class has a class-leading interior and a refined ride. An awful predicted reliability rating is about the only thing holding it back.

Any car will run for several hundred thousand miles if properly cared for. This model year has no serious problems reported so far. However, foreign cars are usually very expensive to repair when they do have problems.

Related images about "Mercedes-Benz E-Class From Past To Present"