The Samsung Galaxy Note series is a series of high-end Android-based phablets and tablets developed and marketed by Samsung Electronics. The line is primarily oriented towards pen computing; all Galaxy Note models ship with a stylus pen and incorporate a pressure-sensitive Wacom digitizer. All Galaxy Note models also include software features that are oriented towards the stylus and the devices' large screens, such as note-taking and digital scrapbooking apps, and split-screen multitasking.

The Galaxy Note smartphones have been considered the first commercially successful examples of "phablets"—a class of smartphone with large screens that are intended to straddle the functionality of a traditional tablet with that of a phone. Samsung sold over 50 million Galaxy Note devices between September 2011 and October 2013. 10 million units of the Galaxy Note 3 have been sold within its first 2 months, 30 million were of the Note II, while the original Galaxy Note sold around 10 million units worldwide. 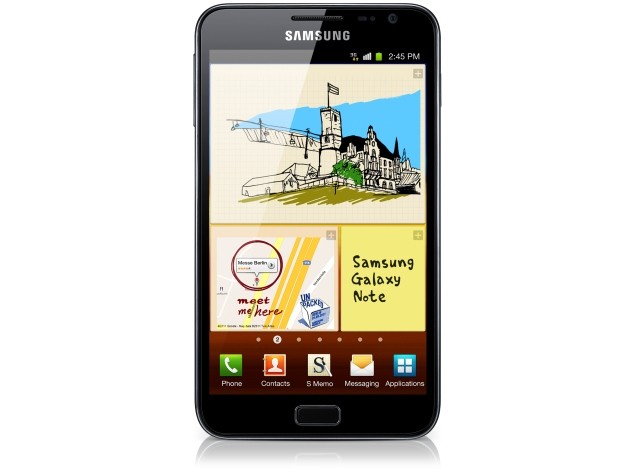 Samsung announced the original Galaxy Note at IFA Berlin in 2011. While some media outlets questioned the viability of the device due to its 5.3-inch screen (which, at the time, was considered extremely large for a phone), the Note received positive reception for its stylus functionality, the speed of its 1.4GHz dual-core processor, and the advantages of such a large screen size. The Galaxy Note was a commercial success: released October 2011, Samsung announced in December 2011, that the Galaxy Note had sold 1 million units in two months. In February 2012, Samsung debuted a Note version with LTE support, and by August 2012, the Note had sold 10 million units worldwide. 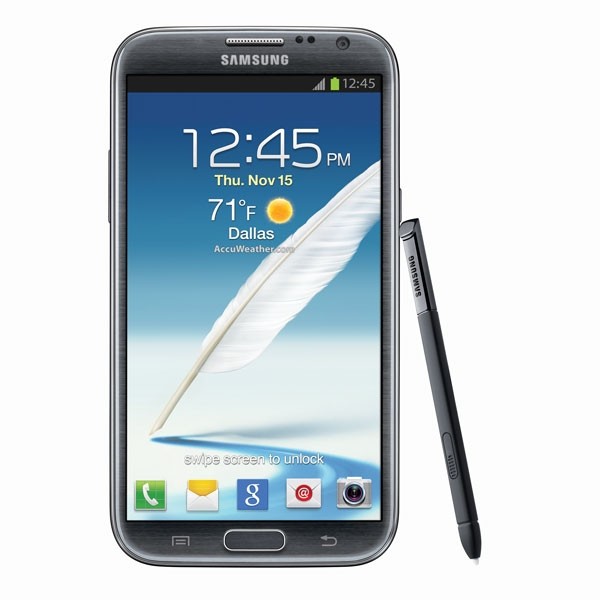 On August 29, 2012, at IFA Berlin, Samsung unveiled a successor to the Galaxy Note, the Galaxy Note II. The new model, released September 2012, featured improvements to the original Note's hardware (with a quad-core processor and a larger 5.5 inches (140mm) display, a revised stylus and an upgraded digitizer with 1,024 levels of pressure sensitivity for more precise pen input, a new hardware design based on that of the Galaxy S III), along with new features such as pen gestures, split-screen multitasking, Air View (which allows previews of content to be displayed by hovering the pen above the screen), and other new features also introduced by the S III. 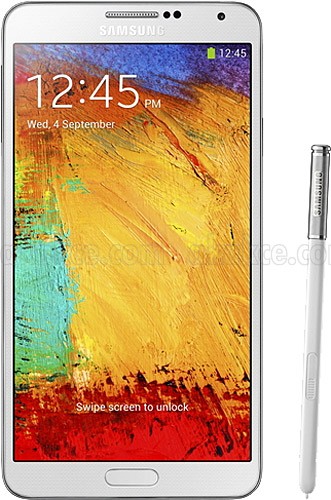 On September 4, 2013, Samsung unveiled the Galaxy Note 3, which introduced a more "premium" design with aplastic leatherbacking, a 5.7 inch (145mm)1080pdisplay, up to 5 minutes of4Kvideo recording,USB 3.0connector, and expanded stylus pen functionality.Despite of predecessor, it doesn't have FM radio. 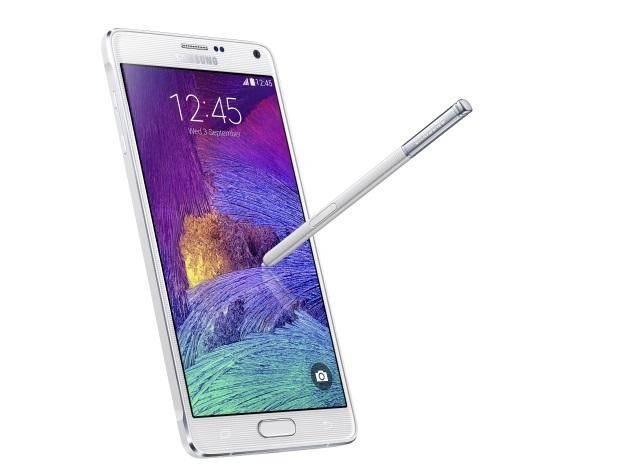 On September 3, 2014, at IFA Berlin, Samsung unveiled a successor to the Galaxy Note 3, the Galaxy Note 4. The new model, released in October 2014, introduced a new design with aplastic leatherbacking and metal frame, a 5.7-inch (145mm) QHD display, a 16MP camera withOIS, improved S-Pen stylus, an upgraded digitizer with 2,048 levels of pressure sensitivity and expanded functionality, fingerprint scanner, and other features taken from theGalaxy S5. 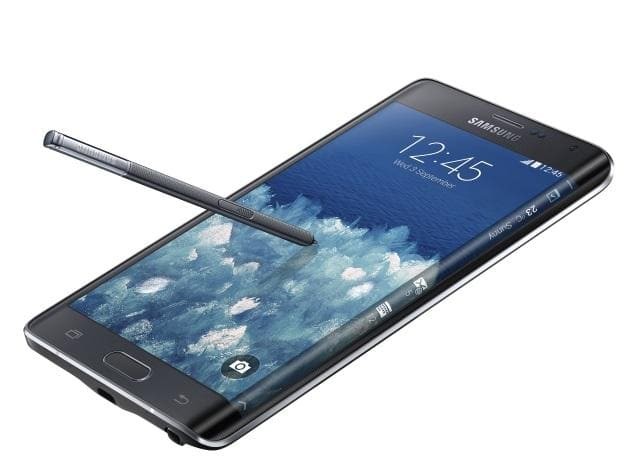 Alongside the Galaxy Note 4, Samsung also unveiled the Galaxy Note Edge, which features a display with a curved portion that wraps around the rightbezelof the device. The curved area can be used as a sidebar to display news and information tickers, application shortcuts, and other tools. 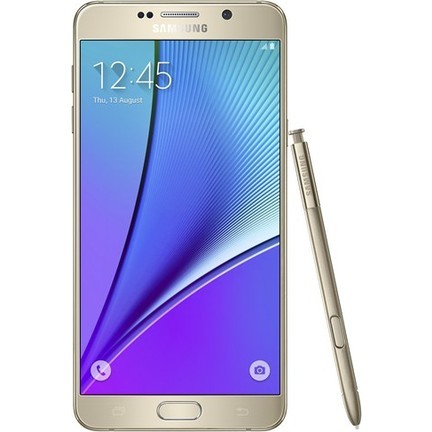 The Galaxy Note 5 was announced on August 13, 2015. It is based upon the specifications and hardware design of theGalaxy S6, including its metal frame and glass backing, a 5.7-inch 1440p display,Exynos7 Octa 7420system-on-chip, as well as a new spring-loaded stylus slot. As with the S6 and unlike previous Note models, the Note 5 does not offer a user-replaceable battery or expandable storage.The new "Screen off memo" feature allows the phone to be awoken directly to a note screen when the stylus is removed,and the camera app allows public and privatelivestreamingdirectly toYouTube. 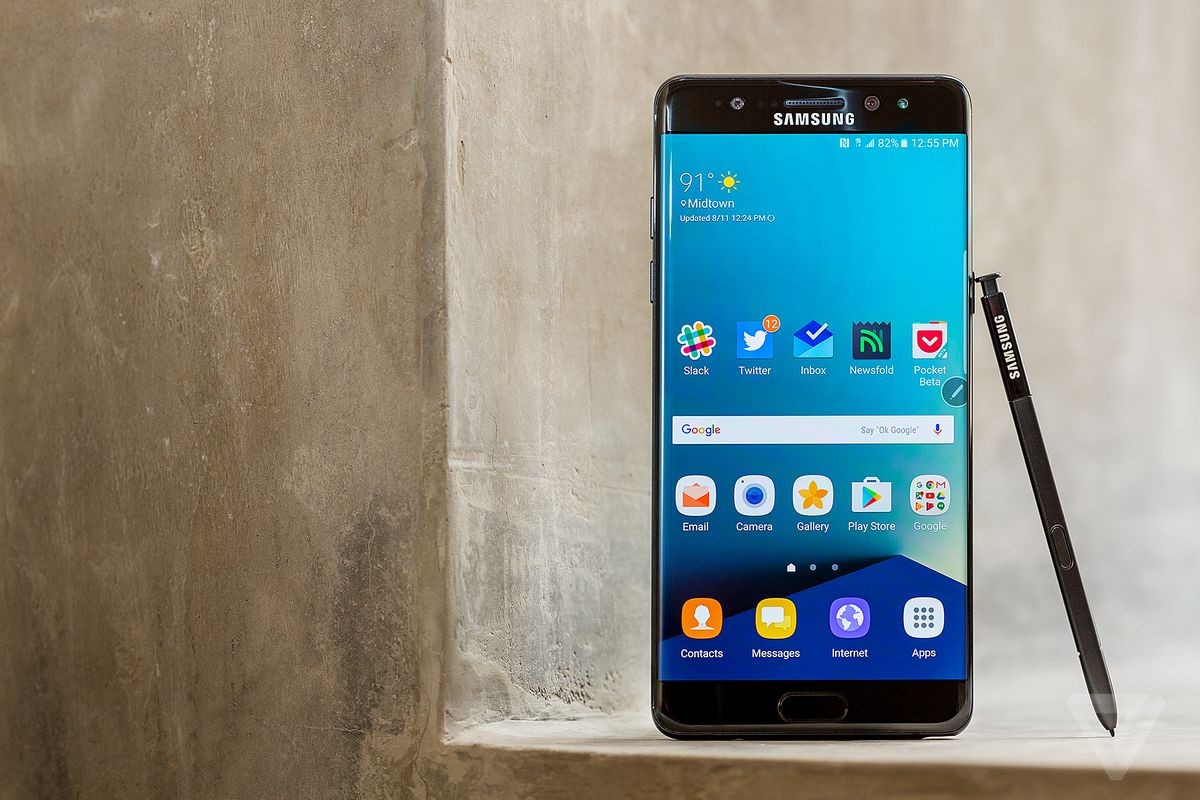 The Galaxy Note 7 was announced during a press event inNew York Cityon 2 August 2016. It is largely based on the hardware of theGalaxy S7, inheriting its processor, camera, and the restoration ofIP68water resistance and expandable storage. It is also Samsung's first device to feature aUSB-Cconnector. The Galaxy Note 7's display is curved across the sides of the device, and its stylus features higher degrees of pressure sensitivity and a finer tip.Samsung branded the device as the Note 7 rather than the Note 6 in order to synchronize its branding with the flagshipSamsung Galaxy S7 series.

The Galaxy Note 7 was afflicted by repeated manufacturing problems with their internal batteries, which led to incidents in which they overheated and combusted.After replacement models experienced similar incidents, the Note 7 was officially discontinued on 11 October 2016, and [almost] all the devices were recalled globallydue to explosions.

After the recall of the Samsung Galaxy Note 7, Samsung decided to release the Note Fan Edition (FE) as the new Note 7 being released in selected countries on July 7, 2017. It comes with a smaller battery than the Note 7 due to safety reasons. 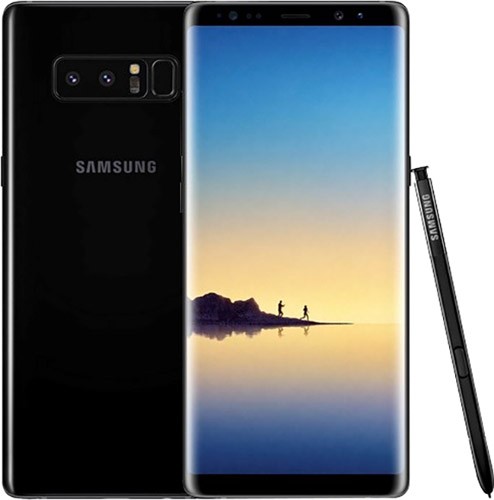 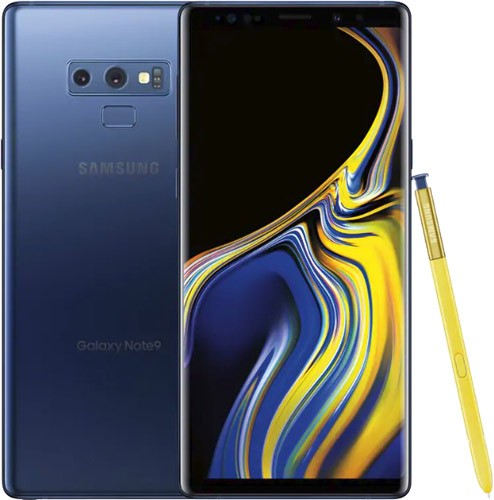 The Note 9 includes an update to Bixby. Bixby will automatically process the user's command. The Note 9 is connected to the SmartThings app and it includes features such as auto sound switching between different smart devices.

The new S Pen introduced is Bluetooth enabled. Users can control the camera,YouTubevideos and slideshows remotely.

The Note 9 has been accepted by theFederal Communications Commission, and it has aSnapdragon845 or Exynos 9810 processor, 6GB RAM for 128 GB variant and 8 GB of RAM for 512 GB variant, a 4000 mAh battery.

The Note 9 uses the same camera hardware seen onSamsung Galaxy S9Plus, with a dual camera setup, a 12MP wide-angle sensor with f/1.5 and f/2.4 dual aperture and a 12MP telephoto sensor with the f/2.4 aperture forBokeheffects at the back. It also has an 8MP front-facing camera. The Note 9 is powered with AI software that improves the photography experience. 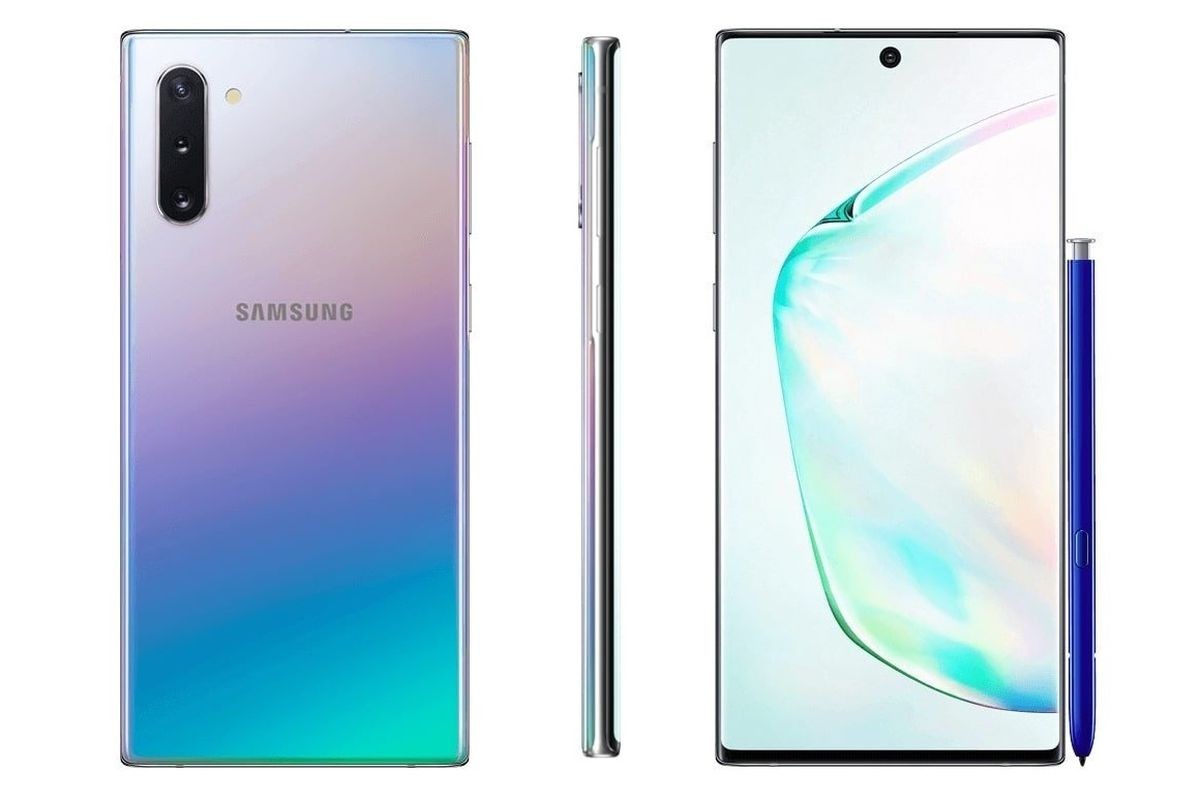 On July 1, 2019, Samsung announced that it would hold its second Unpacked event of the year on August 7th at 4PM Eastern in Brooklyn's Barclays Center. The Galaxy Note 10 and Note 10+ were unveiled at the show. 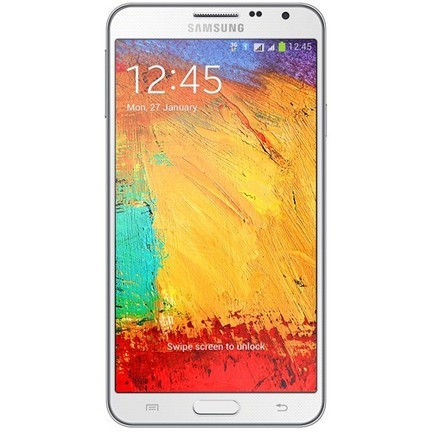 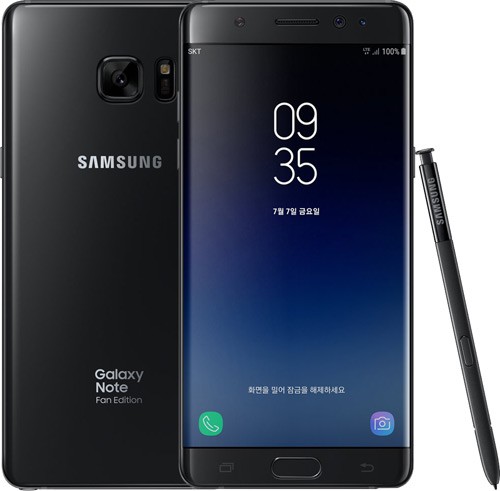 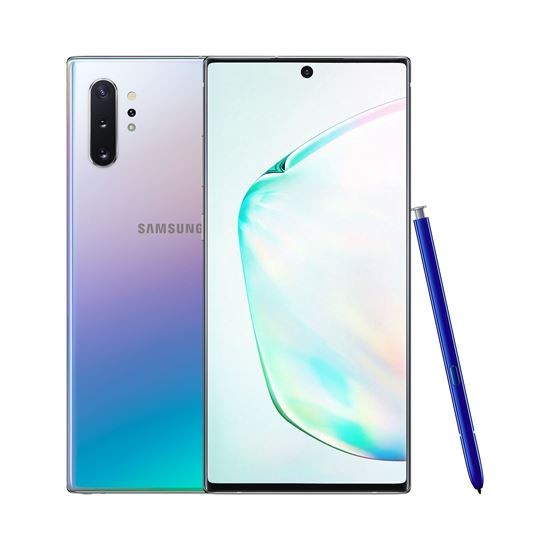 What is the best DSL wireless modem router?

How to Deregister the LG Smart TV Magic Remote?

How to Deregister the LG Smart TV Magic Remote; Press the and (Home) buttons at the same time, for five seconds, to unpair the Magic Remote with your TV.Pressing and holding the button will let you cancel and re-register Magic Remote at once.

How do I find my security key for Comcast?

How can I Find my Comcast account number online?